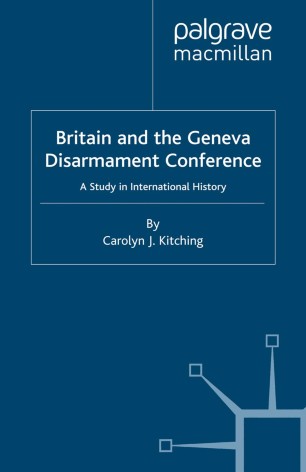 Britain and the Geneva Disarmament Conference

A Study in International History

In this fascinating study, Carolyn Kitching examines the role which Britain played at the Geneva Disarmament Conference, an event which marked a watershed in inter-war international relations. Failure to reach agreement in Geneva hastened the collapse of the Treaty of Versailles, and gave the green light for German re-armament. Britain was arguably the only Power capable of mediating between conflicting French and German demands over the Treaty's disarmament clauses, and this analysis reveals that the traditional interpretation of British policy at the conference needs to be drastically revised.

CAROLYN KITCHING is a Lecturer in Modern History at the University of Teesside. Her publications include Britain and the Problem of International Disarmament, 1919-34 and A History of Disarmament and Arms Control.