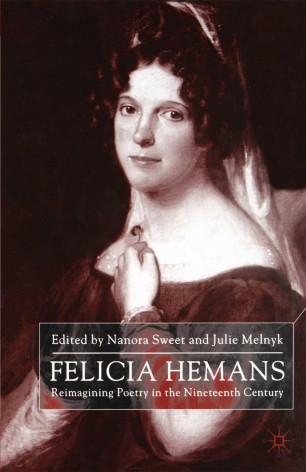 Reimagining Poetry in the Nineteenth Century

This collection of twelve specially commissioned essays, the first to focus on the work of Felicia Hemans, includes new work from important critics in the field - Isobel Armstrong, Stephen Behrendt, Gary Kelly, Susan Wolfson - as well as contributions from emerging scholars. Offering close readings of Heman's poetry, new research on her reception, and analyses of her cultural significance, the collection contributes substantially to our understanding of Hemans and to current debates about romanticism, feminism, canonization, and the relations between gender, culture, and poetry.

'This volume begins with the question 'Why Hemans Now?' and provides, through its many different voices and critical registers, a powerful explanation of why Hemans mattered then and still matters now. In their original, comprehensive approach to her achievement, the essays assembled here constitute a major breakthrough in Hemans studies and establish an important model for the ongoing project of reimagining poetry and women writers in the nineteenth century.' - Greg Kucich, University of Notre Dame

'Why Hemans now?' Melnyk and Sweet's unprecedented collection, which opens with this question, leaves one wondering, 'Why not sooner?' Students of Hemans will find indispensable resources in this volume's sharply focused poetic analyses, no less than its ambitious range of historical and cultural discussion; other readers, who should be drawn by its suggestive attempts to negotiate the contested, shifting claims of such categories as 'Romanticism', historicism, cultural politics, and literary value, may learn new respect for a poet whose cultural power could be mocked or occluded, but never quite erased.' - Tricia Lootens, Associate Professor of English at the University of Georgia

'Felicia Hemans, emerging from a century of obscurity as deep as her former fame, has been ready for us for some time; this sharply-conceived book of essays suggests that we are finally ready for her...The essays in Sweet and Melnyk's stunning collection give us both poet and 'poetess', Hemans the maker and Hemans the phenomenon. But by so doing, they pull no punches and hedge no bets, facing the contradictions of Hemans's work with ingenuity and freshness...

Hemans is, in Marlon Ross's memorable phrase, a great double-crosser, pious where we'd have her passionate,perverse where she is most pious. Sweet and Melnyk's volume is our first, best guide to the astonishments-and the bewilderments-of Hemans's poetry.' - Esther Schor, Associate Professor

'Felicia Hemans (1973 - 1835), one of the best-selling poets of her day, has been rediscovered by the academic establishment after a century of obscurity.' - Julian North, The Byron Journal

'Felicia Hemans was the most widely read female poet of the English-speaking world throughout the nineteenth century and into the early twentieth. During her lifetime, she published twenty volumes of poetry and placed nearly 400 pems in magazines and annuals. But she is not just voluminous: her elegies, epics, songs, narratives, dramas, sonnets and lyrics are intertextual, multilingual, and multicultural. She was reviewed favourably in her lifetime by the major periodicals and was spoken of in the same breath as Wordsworth, Byron, Shelley and Keats. After her death in 1835, scores of selected and collected editions appeared until the rise of modernism. Why are we having to re-imagine Hemans now? How has she been misrepresented?

Taken as a whole, this splendid volume goes a long way towards answering these questions.

This collection is the first to focus exclusively on Hemans. It adds depth to discussions of her Records of Women (1828) and, more importantly, forefronts some of her other work, notably 'The Restoration of the Works of Art to Italy' (1816) and 'Modern Greece' (1817). Finally, it goes a long way towards explaining how Hemans was re-invented after her death, and why she deserve to be reconsidered squarely alongside her male rivals.' - Myra Cottingham, School of Continuing Education, University of Reading, Gender & History

'Felicia Hemans: Reimagining Poetry in the Nineteenth Century presents scholarship that will interest the specialist as well as the general reader.' - Karen Karbiener, Colby College

'Nanora Sweet (who has been particularly active in the challenge to the received understanding of 'Mrs Hemans') and Julia Melynk have brought together a diverse series of essays that confidently situate Hemans within her specific context.' - Alison Chapman, University of Glasgow, BARS Bulletin and Review

'Reading this volume reminded me that romanticists take for granted the decades of scholarship about the sources, historical context,and reception of traditionally canonical figures, scholarship that does not exist for Hemans that this volume begins to provide.' - Andrew Elfenbein, Professor of English, University of Minneosta - Twin Cities, SEL

'These essays reveal a Hemans far more complex and well-versed than even Hemans-friendly readers will expect to find, and draw compelling attention to an impressive array of her poetry...Seamlessly designed as a progressive narrative and argument, this volume not only investigates the ways Hemans reimagines poetry in the nineteenth century, but, as the title aptly suggests, the value of our reimagining Hemans's poetry. ...this volume succeeds admirably in displaying Heman's felicity for reimagining nineteenth-century poetry: with its masterful organization, its magnificent attention to a broad range of material from a gifted and prolific poet, and its sharp critical perspectives, Felicia Hemans: Reimagining Poetry in the Nineteenth Century makes and essential contribution to current work on Romantic-era writers.' - Harriet Kramer Linkin, New Mexico State University, European Romantic Review

'As the first collection of essays on Felicia Hemans ever published, in many respects Sweet's and Melnyk's is a surprising volume that combines the features of an 'opening' book, a first decisive gesture in the direction of Hemans studies, and high quality essays that demonstrate an advanced state of the art...Sweet's and Melnyk's prefatory observations are lucid, accessible and everywhere relevant. They provide an insight into the vast panorama of Hemans's corpus by summarizing some of the fundamental guidelines in recent criticism, whilst providing a useful overview of current