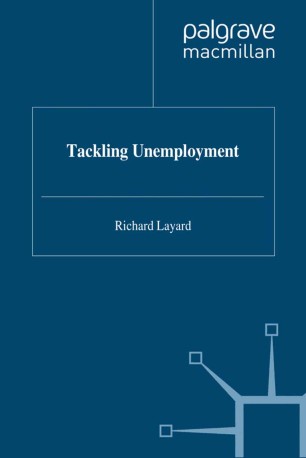 Richard Layard is one of Britain's foremost applied economists, whose work has had a profound impact on the policy debate in Britain and abroad. This book contains his most influential articles on the subject of unemployment. It is published along with a companion volume Inequality , which deals with these topics and with economic transition. Unemployment explains what causes unemployment and proposes remedies to reduce it. There is a strong focus on how unemployed people are treated and how this affects unemployment - including Layard's well-known recommendation of a job-guarantee for long term unemployed people. Other key topics covered are the effect of unions and wage bargaining, the effect of low skill, and the possible role of rigid employment laws. The book opens with Richard Layard's personal credo Why I became an Economist .

RICHARD LAYARD is Director of the LSE's Centre for Economic Performance. He has worked for many years on the problems of unemployment and inflation and is co-author of the influential book Unemployment: Macroeconomic Performance and the Labour Market. In 1985 he founded the Employment Institute and was its Chairman from 1987-92. During the 1970s he worked on income distribution, co-authoring The Causes of Poverty for the Royal Commission on the Distribution of Income and was a part-time consultant to the Treasury. During the 1980s he was chairman of the European Commission's Macroeconomics Policy Group, and then co-chairman of the World Economy Group set up by the UN University. He was a member of the Commission on Public Policy and British Business whose report Promoting Prosperity was published in 1997. Following the General Election of 1997, he has worked as a consultant to the Department of Education and Employment.

In November 1991 Yegor Gaidar invited him to become an adviser to the Russian government's economic staff. He has acted in that capacity ever since and heads a team of 3 Westerners and 3 Russians working in Moscow with the economic staff of the government. The team produces Russian Economic Trends, a comprehensive monthly review of the Russian economy.

'An account of the contribution of one of Britain's leading labour-market economists to one of the key economic policy debates of the 1980s and 1990s. Few people have made such a consistent and influential contribution over the years as Layard. He helped found the respected Employment Policy Institute and has ensured the Centre for Economic Performance at the London School of Economics remains a major source of innovative academic work on the economy and the labour market. He can claim to be one of the intellectual godfathers of the welfare to work strategy that the government is now putting into practice.' - John Monks, Times Higher Education Supplement