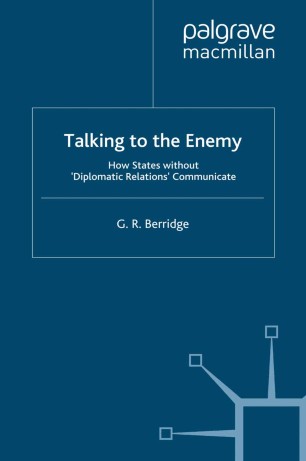 Talking to the Enemy

How States without ‘Diplomatic Relations’ Communicate

This book begins by discussing the problems of non-recognition and breaches in diplomatic relations, and then considers the advantages and disadvantages of the different methods which states, not in diplomatic relations, employ when they nevertheless need to communicate. These include intermediaries, disguised embassies, ceremonial occasions such as working funerals, the diplomatic corps in third states and at the seat of international organisations, special envoys, and joint commissions. In short, it is concerned with the kind of diplomacy which produced the rapprochement between Israel and the PLO in September 1993.

G.R. BERRIDGE is Professor of International Politics and Director of Research at the Centre for the Study of Diplomacy, University of Leicester.