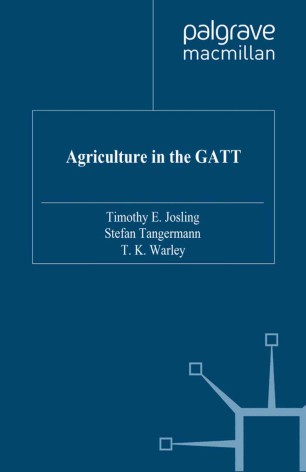 Agriculture in the GATT

Trade in temperate zone farm products between the developed countries has been beset with problems since the GATT's inception in 1947. The basic problem was always that the conditions in world agricultural markets were distorted by the national agricultural policies followed by all developed countries - policies which national authorities were reluctant to adapt to conform with the requirements of a liberal international trading system for agricultural products. This book describes and analyses the attempts that were made to make trade in agriculture less distorted, more stable and predictable, and less of a dangerous source of political friction between nations, in successive rounds of negotiations under the General Agreement on Tariffs and Trade in the 45-year period from GATT's inception in 1947 to the end of the Uruguay Round in 1993. While the book analyses the development of international trade policy throughout the post-war period, particular attention is given to the Kennedy, Tokyo and Uruguay Rounds of GATT negotiations in which the problems of trade in agricultural products were confronted.