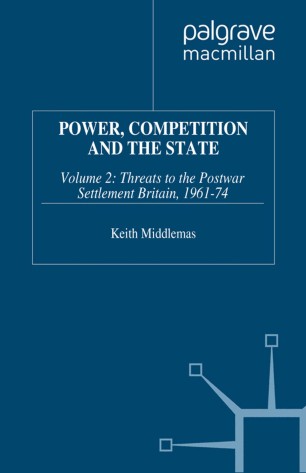 Power, Competition and the State

'An extraordinarily rich and suggestive work, full of illuminating asides and thought-provoking insights, backed by a formidable mastery of detail. This is a magnificent achievement.' David Marquand In the forefront of contemporary history, this volume displays the same breadth, originality and innovation as the first. The start of intense rivalry between industry, trade unions and the financial sector, to influence policy in postwar Britain, increased in the late 1950s. Macmillan's government succeeded briefly in restoring some of the original wartime consensus after 1961, only to see hopes for Conservative planning wither. Competition among interest groups to settle how the national interest should be defined made Wilson's attempt to create a Labour planned economy almost impossible. Despite the spur of relative decline, modernisation always fell far short of politicians' aims, putting in doubt the ability of even a modern state to achieve its ambitions. A series of crises exposed promises of breakthrough into growth, which governments blamed on the self-interest of institutions - without whose co-operation they still believed they could not govern.