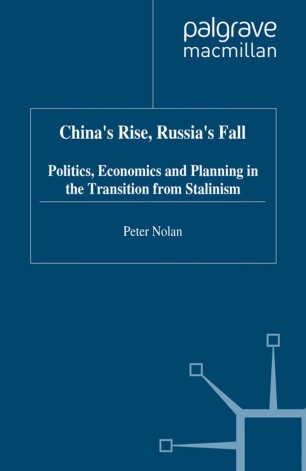 Politics, Economics and Planning in the Transition from Stalinism

'A lively and well written comparison of economic transformation in China and the USSR/Russia, combining a good knowledge of the Chinese economy with a radical critique of Western transition orthodoxy, this very topical and very controversial book will be useful reading for students, administrators in many countries and international agencies, and business people.' - Michael Ellman, University of Amsterdam `Peter Nolan makes a pungent challenge to conventional wisdom by arguing that the Chinese approach to system reform has been vastly more successful than the shock therapy applied to Russia. His book is based on extensive comparison and deep insight into the political economy of both countries.' - John Toye, Institute of Development Studies, Sussex This book is the first attempt to analyse systematically the dramatic contrast in the results of post-Stalinist reform in China and Russia. It argues that there emerged a 'transition orthodoxy' about how to reform the communist systems of political economy. However, it was deeply flawed. The advice which flowed from this orthodoxy was the primary cause of the Soviet disaster. The decision not to follow it was the main reason for China's enormous success in its reform programme.