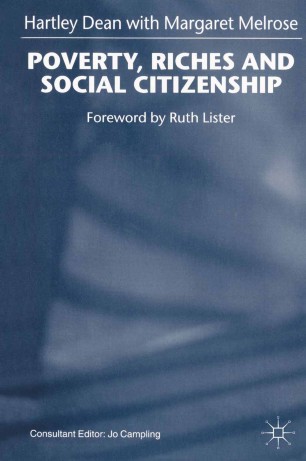 At a time when the gap between rich and poor has been increasing, Poverty, Riches and Social Citizenship provides an accessible introduction to current debates about inequality, exclusion and the nature of citizenship, while also presenting an innovative exploration of popular beliefs and values in Britain. The authors develop a series of conceptual models by which to understand the competing traditions which have informed ideas about citizenship, and the contradictory moral notions that currently inform popular expectations of the welfare state.

HARTLEY DEAN is Reader in Social Policy at the University of Luton. He previously worked for twelve years as Director of the Brixton Advice Centre, an independent inner urban rights agency. More recently, he has undertaken research and teaching at the Universities of Kent and Luton in areas relating to poverty, social exclusion, welfare rights and redress. His several publications include Social Security and Social Control (1991), Dependency Culture: The Explosion of a Myth (with P. Taylor-Gooby, 1992) and Welfare, Law and Citizenship(1996).

MARGARET MELROSE is a Researcher in the Department of Social Studies at the University of Luton. She was previously a part-time Lecturer in Sociology at Birkbeck College London and undertook a study of nation and nationhood in British soap opera texts at the University of East London for an MA in Media and cultural Studies. She has been working for 4 years with Hartley Dean on studies of social security benefit fraud and popular perceptions of poverty, wealth and citizenship.