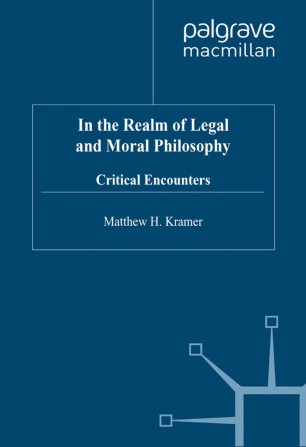 In the Realm of Legal and Moral Philosophy

In this wide-ranging investigation of many prominent issues in contemporary legal, political, and moral philosophy, Matthew Kramer combines penetrating critiques with original theorising as he examines the writings of numerous major theorists (including Ronald Dworkin, H.L.A. Hart, Alan Gewirth, Ronald Coase and Richard Posner). Among the many topics covered by Kramer's essays are the relative merits of legal positivism and natural-law theory, the appropriate understanding of justice, the role of consequences in moral decision-making, and the ultimate foundations of moral judgements.

MATTHEW H. KRAMER is University Lecturer in Jurisprudence at Cambridge University, and Fellow and Director of Studies in Law at Churchill College, Cambridge. His previous books are Legal Theory, Political Theory, and Deconstruction: Against Rhadamanthus (1991), Critical Legal Theory and the Challenge of Feminism: A Philosophical Reconception (1995), Hobbes and the Paradoxes of Political Origins (1997), and John Locke and the Origins of Private Property: Philosophical Explorations of Individualism, Community, and Equality (1997).