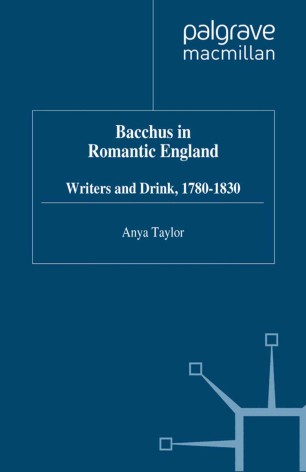 Bacchus in Romantic England describes real drunkenness among writers and ordinary people in the Romantic age. It grounds this 'reality' in writings by doctors and philanthropists from 1780 onwards, who describe an epidemic of drunkenness. These commentators provide a context for the different ways that poets and novelists of the age represent drunkards. Wordsworth writes poems and essays evaluating the drunken career of his model Robert Burns. Charles Lamb's essays and letters reveal a real and metaphorical preoccupation with his own drinking as a way of disguising his personal suffering; his companion Coleridge writes drinking songs, essays about drunkenness, and meditations about his own weakness of will that show both festive inebriety and consciousness of an inward abyss; Coleridge's son Hartley, whose fate his father had prophesied, experiences drunkenness as the life-long humiliation described in his poems and letters. Keats's complex dionysianism runs through 'Endymion' and the late odes, setting him at odds with his temperate hero Milton. Men in the Romantic age, such as Sheridan, Byron, Moor, and Clare, celebrate rowdy friendship with tales and songs of drinking; Romantic women novelists such as Smith, Edgeworth and Wollstonecraft depict these men stumbling home to abuse their wives. Although excessive drinking is real in the period, observers and participants can still maintain ambivalence about its power to release or to debase the human being.

ANYA TAYLOR is Professor of English at John Jay College of Criminal Justice, The City University of New York, where she also teaches in the Alcohol and Substance Abuse Program. She is the author of Magic in English Romanticism (1979), Coleridge's Defence of the Human (1986), Coleridge: On Humanity (1994), and many articles on Romantic and modern writers, and on addictions.

'Judiciously argued and dree from post-modern jargon, Taylor's study adds an important dimension to the understanding of British Romanticism.' - Choice

'...As well as being a professor of English, Anya Taylor teaches in an alcohol and substance abuse programme, and she has put her knowledge and experience to good use in examinining the carers of Romantic drunks...extremely readable...fascinating.' - Times Literary Supplement

'Bacchus in Romantic England is a welcome and illuminating study of drinking in the period. The levels of euphemism used by the male writers, which Taylor disinters and closely examines in the light of women's straightforward writing about drunkards and drinking, reveal themselves to be a code of masculinity by which addition to a Romantic scholar's bookshelf.' - New Books in Nineteenth-Century Studies

'...the great strength of this book is its marvelously diverse, offbeat, and informative reading...many illuminating passages of literary criticism, among them some superb pages on Keats and Paradise Lost...an incisive analysis of the appalling individual and social risks of alcoholism...The collection of names in this is rich, original, and expansive study is more like a rollcall of honour than a burial of the dead.' - Nicola Trott, The Wordsworth Circle

'...The writing is crisp, and the book is a pleasure to read.' - Dionysos: Journal of Literature and Addiction

'Taylor also provides an original and illuminating survey of the medical literature in which, beginning in the 1780's, the modern concept of inebriety as a disease (rather than a moral failure) was crystallizing. Taylor's thesis is that this model of inebriety as an emerging disease, together with a new psychology of interiority, combined to give drinking a complex doubleness in the romantic period.' - Sewanee Review

'How can a writer make room for such enjoyment without diminishing the importance of the dangers? Anya Taylor achieves this balance in her study of alcohol in the Romantic period by making the double nature of drink a central theme...What emerges from Taylor's study is a profound consideration of the doubleness within human beings, which the cultural and physiological power of alcohol allows her to examine...Taylor writes with admirable warmth and versatility, vigorously searching for what can be learned from the dynamics of alcoholism and dependency, always mindful of the mysteries involved...Taylor lets some depths, both of self-destructiveness and of bliss, remain unfathomed, and this reserve is one of the book's great virtues.' - European Romantic Review

'Moves with ease from the examination of biography to literary texts...philosophically informed and attuned to the concerns of social history, while remaining consistently literary critical...Taylor's admirable examination of the complex reality of Coleridge's alcoholism...Taylor offers us a series of brilliant readings of Keats alongside Milton...'Waiter - bring me a glass of d-d stiff Grog - and rub my a-e with a brick-bat...[a brilliantly-informed and intelligent study]. - Matthew Scott, Romanticism On the Net

'...this unique and occasionally disturbing book...offers a fresh and highly informed perspective on a distinct cultural phenomenon that was, and for that matter still is, a vexed moral problem...The plentiful instances offered here deepen our historical understanding of Romantic medicine and of an important and neglected strand in Romantic lyricism.' - Michael John Kooy, British Association for Romantic Studies Bulletin & Review