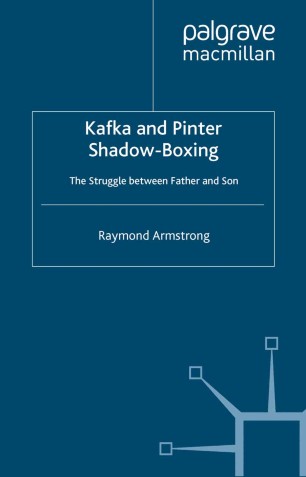 The Struggle between Father and Son

Kafka and Pinter is the first major study to focus on the extraordinary affinity between these two heavyweights of twentieth-century literature. As well as offering a bold new interpretation of Kafka's portrayal of the struggle between father and son in his classic stories The Judgement and The Metamorphosis , the book seeks to assess and document, through a detailed exposition of textual and other evidence, the extent to which Pinter's treatment of the same theme has been influenced by Kafka's example. Three of Pinter's plays - The Homecoming, Family Voices and Moonlight - are examined in depth, the last two more comprehensively perhaps than ever before. Clearly written and replete with all manner of fascinating parallels and interconnections, this book commends itself not only to students of Kafka and/or Pinter, but also to those with a more general interest in such areas as comparative literature, theatre studies, religion and psychology.

'Armstrong, who [writes with flair, eloquence, and panache,] has read widely, frequently citing from Kafka's prose, letters, and diaries, as well as from many of Pinter's plays...Armstrong's ability to play his wide-ranging knowledge of comparative literature...Armstrong's book is most valuable...in offering new insights into the prose of the German writer and in presenting a new way of approaching three plays that were written in three distinct periods of Pinter's life.' - Gene A. Plunka, University of Memphis