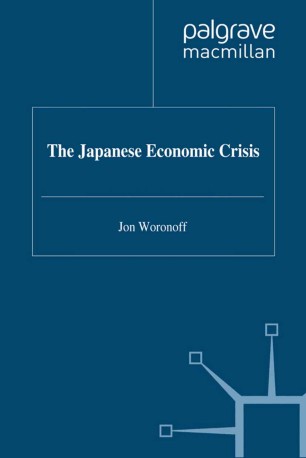 `For years Jon Woronoff has been telling us that far from having devised some miraculous solution to the problems of capitalism, Japan remains vulnerable to crisis. For years he was either patronised or ignored by purveyors of the myth of the `Japanese miracle'. Now, however, the economic `bubble' has well and truly burst, the `miracle' looks more and more tarnished and Woronoff has the grim satisfaction of being able to say `I told you so.' - John Crump, University of York Even while Japan's supporters and apologists boasted of the 'miracle' economy, it was developing weaknesses and flaws which have undermined it. Growth is slowing, the labour force is aging and youngsters lack the old work ethic. Manufacturing is dwindling while inefficient services, distribution and agriculture fester. There are good companies, but many more mediocre ones, and even the best make slim profits. Meanwhile people are tired of long work hours and little leisure, high prices for virtually everything, inadequate housing, amenities and welfare, and a quality of life that is a poor reward for their sacrifices. This adds up to a crisis for many Japanese companies, individuals and society as a whole. It is a crisis that has been spreading rapidly since the collapse of the 'bubble' of the 1980s. And there is little hope that another 'miracle' can overcome the problems and put the economy back on track. More radical change is needed, the sort of change that is most unlikely to occur in Japan. This predicament is well known to the Japanese. But it is inadequately reflected in books for foreigners. That is why Jon Woronoff has written The Japanese Economic Crisis . Again he reveals the problems and failures, the facts and realities that others still miss but are indispensable if you want to understand the true situation.