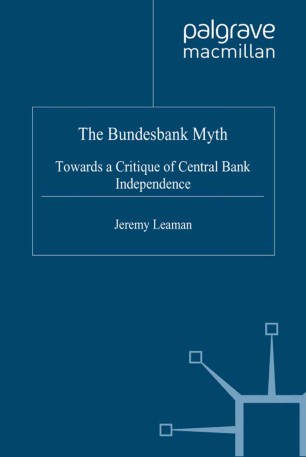 Towards a Critique of Central Bank Independence

Until recently, central bank independence was confined to just two major capitalist countries: the USA and Germany. As a result of stagflation and the voguish espousal of neo-liberalism in the 1980s, the institution has been adopted in most OECD and in many other countries. This book questions the principle of autonomy, examining the Bundesbank in historical context and exposing the flaws in both the technical and the political case for the wholesale adoption of the Bundesbank model by other states.

JEREMY LEAMAN is Senior Lecturer in the Department of European Studies at Loughborough University. His specialist research field is the political economy of modern Germany. He is author of The Political Economy of West Germany 1945-1985; he has co-edited two other volumes and written numerous chapters and articles on related subjects.