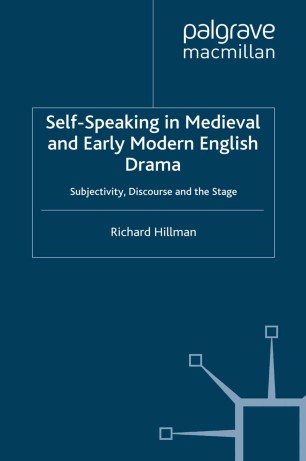 Subjectivity, Discourse and the Stage

This book documents the changing representation of subjectivity in Medieval and Early Modern English drama by intertextually exploring discourses of 'self-speaking', including soliloquy. Pre-modern ideas about language are combined with recent models of subject formation, especially Lacan's, to theorize and analyze the stage 'self' as a variable linguistic construct. Both the approach itself and the conclusions it generates significantly diverge from the standard New Historicist/Cultural Materialist narrative of subjectivity. Plays range from the Corpus Christi pageants to the Beaumont and Fletcher canon, with Shakespeare a recurrent focus and Hamlet, inevitably, the pivotal text.

'...this book challenges some of the paradigms of new historicist and cultural materialist critics as it builds a persuasive argument stressing continuities between subjectivities on medieval and early modern stages...Especially valuable for the innovative ways in which it traverses the ground between the medieval and early modern periods, this challenging work will be of interest to literary critics, cultural critics, and historians of the Middle Ages and Renaissance alike.' - Jonathan Baldo, Medieval and Renaissance Drama in England