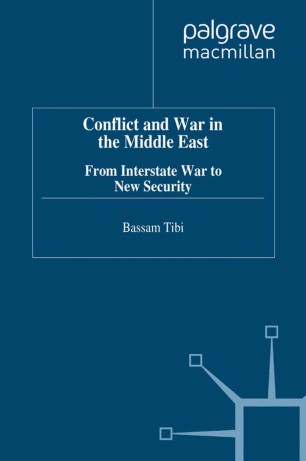 Conflict and War in the Middle East

From Interstate War to New Security

Few studies of Middle East wars go beyond a narrative of events and most tend to impose on this subject the rigid scheme of superpower competition. The Gulf War of 1991, however, challenges this view of the Middle East as an extension of the global conflict. The failure of the accord of both superpowers to avoid war even once regional superpower competition in the Middle East had ceased must give rise to the question: Do regional conflicts have their own dynamic? Working from this assumption, the book examines local-regional constraints of Middle East conflict and how, through escalation and the involvement of extra-regional powers, such conflicts acquire an international dimension. The theory of a regional subsystem is employed as a framework for conceptualising this interplay between regional and international factors in Tibi's examination of the Middle East wars in the period 1967-91. Tibi also provides an outlook into the future of conflict in the Middle East in the aftermath of the most recent Gulf War.

BASSAM TIBI is Professor of International Relations at the University of Gottingen and, since 1988, a Research Associate at Harvard University. He has also taught at Frankfurt and Heidelberg, and held visiting professorships in the Middle East and Africa including Université de Cameroun and University of Khartoum. He is the author of Crisis of Modern Islam, Arab Nationalism: A Critical Enquiry and Islam and the Cultural Accommodation of Social Change. He has written six monographs in German and co-authored books in English, German and Arabic including Tribes and State Formation in the Middle East, Human Rights in Africa: Cross-Cultural Perspectives and The Study of the Middle East: International Perspectives. He is a member of the Fundamentalism Project of the American Academy of Arts and Sciences and co-author of the second volume of this international project.