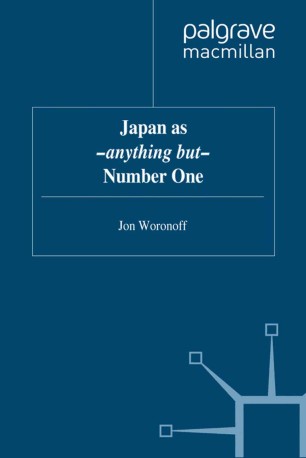 Japan as –anything but– Number One

'Japan as - anything but - Number One should be everybody's number two book to read about Japan. After almost any introduction that lays out the claims made for Japan's truly unusual economy and society, the next step forward should be to read an informed critical text, to set a contrast in the mind. No book achieves this more concisely, more acurately and more succinctly than Japan as - anything but - Number One .' - James Y. Bourlet, Professor of Japanese Management, London Guildhall University Is Japan No 1? Well, maybe it is if you only consider those sectors where it has been particularly successful. But not if you add many others where its performance was mediocre or worse. Is Japan No 1? Well, maybe it is if you ask the foreign 'friends' who have made a career (and sometimes a fortune) as apologists of Japanese causes. But, if you ask the Japanese themselves, you will find that they are anything but satisfied. Is Japan No 1? Well, maybe it is if you are taken in by the tatemae, i.e. the official version or how its admirers like to picture it. But it does not look so great once you perceive the honne, i.e. the realities of life in Japan. Is Japan No 1? Well, maybe it is if you take what is best in Japan and contrast it to what is less good in foreign countries. But it does not compare so well if you mix the good with the bad in both places. No, the author does not think that Japan is a horrible place or that its leaders have made a complete mess of things. But, if you look closely, it is certainly not the extraordinary success it is frequently claimed to be. It is closer to the mean, with many serious problems that will only get worse if people foolishly assume it is No 1.