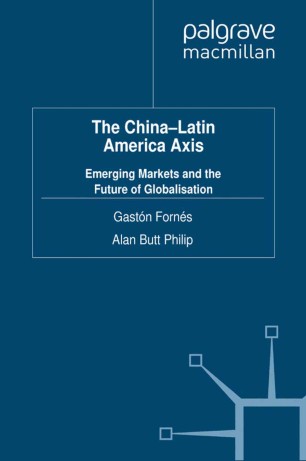 Emerging Markets and the Future of Globalisation

The impressive growth of trade and investments between China and Latin America has attracted the attention of the business world and policy makers. This book analyses the business of the main players at the country/region and company levels in the context of globalization and growing importance of emerging markets in the world economy.

GASTÓN FORNÉS received a PhD in Management from the University of Bath, UK, an MBA from Universidad Adolfo Ibañez, Chile, and his first degree in Management from Universidad Nacional de Cuyo, Argentina. He was also an MBA Exchange Student at Marshall School of Business, University of Southern California, USA. Before starting his career in academia, he worked in industry for around ten years in the USA, Argentina and Chile. Dr. Fornés received the Liupan Mountain Friendship Award from the Ningxia Government, China in 2010 and is Fellow of the UK Higher Education Academy.
ALAN BUTT PHILIP is Honorary Jean Monnet Reader in European Integration at the University of Bath, UK, where he has taught and conducted research since 1975, mostly within the School of Management where has was head of Postgraduate Programmes (1996-98) and Head of Undergraduate Programmes (1998-2000 and 2007-2010) among various senior management roles. He has been active in UK politics as a Liberal/Liberal Democrat candidate for the House of Commons and the European Parliament over many decades.