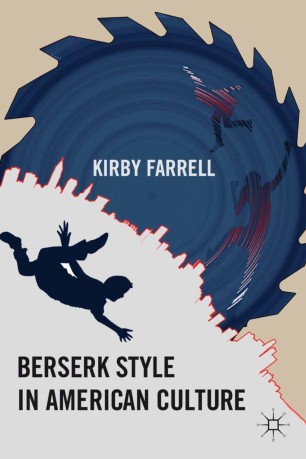 Focusing on post-Vietnam America, using perspectives from psychology, anthropology, and physiology, this book demonstrates the need for criticism to unpack the confusions in language and cultural fantasy that drive the nation's fascination with the berserk style.

KIRBY FARRELL is a Professor at the University of Massachusetts, Amherst, USA.

"Reading Farrell's book really gets your juices flowing! [. . .]I have already been able to use some of this material in classes to good effect, allowing an old-timer such as myself to make a meaningful connection to the young people's world of interests. Any book that does that gets my automatic thumbs up! Farrell's book will certainly be recognized as a valuable contribution within the field of cultural criticism, but also in American Studies, modern history, cultural philosophy, sociology, and other fields that seek to understand and interpret American culture and, more generally, the ethos of late capitalist society." - Daniel Liechty, The Ernest Becker Foundation

"As a scientist studying the workings of information in society, I've tracked Kirby Farrell's trenchant analyses of literature and culture for over 35 years. I've come to expect a lot. Still, Berserk Style amazes me, for its audacity, its clarity, and the scope of its stories and insights. We usually think of 'berserk' behaviors, from apocalyptic rampages like mass school killings to ecstatic revels like Burning Man, as extremes of experience, outside ordinary lives.With rich evidence and fascinating detail, Farrell shows how contemporary culture has re-framed many varieties of the berserk into self-conscious strategies - 'styles' - of sensemaking and control. Beyond real but remote actions of the intoxicated or deranged, he demonstrates how 'berserk style' has become a widespread lens for organizing modern experience, and an often-troubling resource for mobilizing and rationalizing cultural and political action on scales both personal and grand. For me, this is why Berserk Style is such a compelling and necessary read: like the best works on culture or humanities, it shows how deeply surprising cultural arrangements, perspectives, and strategies hiding in mundane and typical experience profoundly shape how we think and what we do. A double reward, Berserk Style's landmark analysis of contemporary culture both enlightens us and empowers us." - Les Gasser, Professor of Information and Computer Science, University of Illinois at Urbana-Champaign

"Like the 'bear shirt' of the Viking ecstatic from which the term is derived, the berserker is a cultural style both enthralling yet repulsive; put on to secure oneself against death anxiety, the threatened disintegration of mind, self, body, or nation. Drawing from a storehouse of cinema, news stories, ads, cartoons, literature, and lyrics from the post-Vietnam era, Kirby Farrell has painted a masterful, disturbing portrait of the American subconscious." - James Aho, author of Sociological Trespasses

"In this work of extraordinary insight, Farrell enables us to discern an important pattern in culture. In finding that the incidence of actual beserk rampages is on the rise, he also finds an increase in the realm of behavior - consisting of actions that are the figurative equivalent of going beserk. In this sense, what Wall Street did in the early 2000s was to go berserk. The other occurs in the realm of imagination, and consists of images and ideas of the act of going berserk. Thus, this book takes things that have been under our noses and places them before our eyes. This book is ambitious in its conception and compelling in its execution." - Ralph Whitehead, Professor, University of Massachusetts, Amherst

"Farrell has undertaken yet another fascinating journey through modern culture and the human condition. Farrell relates rageful outbursts to a culture that has been traumatized and now accepts the warrior pose as an inevitable result. Developing ideas from his earlier book, Post-traumatic Culture, Farrell weaves a fascinating fabric from examples such as Columbine, Mike Tyson, 'Going Postal,' and Wall Street excesses into a cultural motive that pervades the US and invokes feelings of godlike invulnerability and purposefulness. As always, he is a provocative and highly readable cultural critic who leaves the reader with a new and broader lens through which to view darkly our current dystopia." - Don Dutton, Professor of Psychology, University of British Columbia