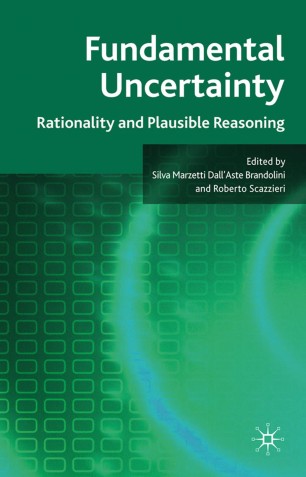 This volume addresses the subject of uncertainty from the point of view of an extended conception of rationality. In particular, the contributions explore the premises and implications of plausible reasoning when probabilities are non-measurable or unknown, and when the space of possible events is only partially identified.

ROBERTO SCAZZIERI is Professor of Economic Analysis, University of Bologna; Senior Member, Gonville and Caius College and Clare Hall, Cambridge. He won the St Vincent Prize for Economics, 1984 and the Linceo Prize for Economics, 2004. He has authored A Theory of Production. Tasks, Processes and Technical Practices, Oxford, 1993; co-edited Foundations of Economics. Structures of Inquiry and Economic Theory, Oxford, 1986; Production and Economic Dynamics, Cambridge, 1996; Knowledge, Social Institutions and the Division of Labour, Cheltenham, UK and Northampton, US, 2001; Reasoning, Rationality and Probability, Stanford, 2008; The Migration of Ideas, Sagamore Beach, 2008; Markets, Money and Capital. Hicksian Economics for the 21st Century, Cambridge, 2008; and Capital, Time and Transitional Dynamics, London and New York, 2009.