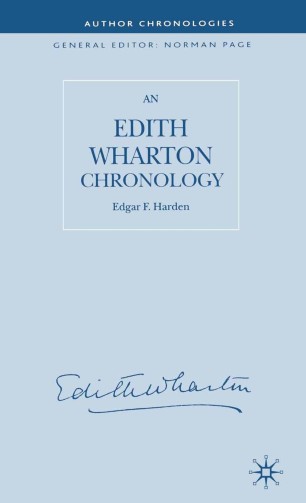 This new volume in the Author Chronology series illuminates the writing of Edith Wharton by detailing her experiences and placing her in her social context. Edith Wharton was a prolific as well as a many-sided writer, who created not only novels, novellas, short stories, and poems, but also a notable series of travel writings, and did translations, pieces for the theatre, and essays on other writers and their works, as well as on the creation and criticism of fiction.This account of Wharton's personal and professional life provides an invaluable insight into an important American woman writer of the Twentieth Century.

EDGAR F. HARDEN received the AB degree from Princeton University and the AM and PhD degrees from Harvard University. Since 1966 he has taught at Simon Fraser University, where he is Emeritus Professor of English. He has published on Browning, Trollope and especially Thackeray in journals that include Victorian Poetry; PMLA; Nineteenth-Century Fiction; Journal of English and German Philology; Huntington Library Quarterly; Studies in English Literature 1500-1900; and Papers of the Bibliographical Society of America. He is also the author of The Emergence of Thackeray's Serial Fiction; Thackeray's 'English Humourists' and 'Four Georges'; 'Vanity Fair: A Novel Without a Hero'. A Critical Study; Thackeray the Writer: From Journalism to 'Vanity Fair'; Thackeray the Writer: From 'Pendennis' to 'Denis Duval' and A William Makepeace Thackeray Chronology; and he has edited Thackeray's Henry Esmond; Annotations for the Selected Works of W. M. Thackeray; The Letters and Private Papers of William Makepeace Thackeray. A Supplement; A Checklist of Contributions by William Makepeace Thackeray to Newspapers, Periodicals, Books and Serial Part Issues, 1828-1864; Selected Letters of William Makepeace Thackeray; and Thackeray's 'Barry Lyndon'. His last book was A Henry James Chronology (Palgrave Macmillan, 2005).