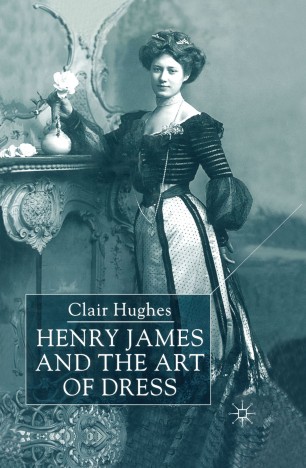 Henry James and the Art of Dress

Henry James was fascinated by clothing and dress. This book examines, for the first time, the role of dress in reinforcing thematic and symbolic patterns in James's fictional world. Hughes traces a development from the significance of dress in discussion of 'the American Girl' in the early works, through dress as an indicator of social position, to the emergence of the more unstable and threatening aspects of dress, which culminate in the strange case of the coat of changing colours in The Sense of the Past.

CLAIR HUGHES is Professor of English and American Literature at the International Christian University in Tokyo. Her previous work includes A Long Way To Go: A Pictorial and Literary Collage of 19th Century Women, English Portraits, and The English Family Portrait.

'A fascinating text which casts an unusual light on James's novels.' - Anita Brookner

'One of the great lacunae in James studies has finally been filled by a scholar on whom nothing is lost. Her gifted prose, however, happily conceals that scholarship, and it is a joy to read! Without doubt, it will not only become the classic treatment of its subject, but will create new readers for Henry James.' - Adeline R. Tintner

'Clair Hughes gives us a Henry James who clothes the people of his portraits with the care that John Singer Sargent gave to the subjects of his paintings. She gives is a book which demonstrates that James's attention to dress was indispensable to his rendering shades of character in his fiction.' - Joseph Wiesenfarth, Nathan S. Blount Professor of English, University of Wisconsin, Madison

'Dress, for James, is a key indicator of class and taste, which has largely gone unacknowledged by his critics. Clair Hughes offers a reading of costume in James's novels which freshly illuminates the complex interactions of his characters and their notoriously ambiguous relationships. Itself stylishly written, and fully contextualized, this wide-ranging study provides an original and exciting new approach to the novels which will re-open debate about their meaning, and further enrich their social and cultural nuances.' - Dr Valerie Sanders, Reader in Victorian Literature, University of Sunderland

'Wit and erudition are perfect coordinates in this intelligent and stylish study of dress in the fiction of Henry James. Not only does it illuminate the symbolic resonances and narrative function of costume in James's writing, it also explores the deeper social and textual significations of the language of dress, drawing on the material evidence of contemporary fashion to offer a richly textured, finely nuanced and immensely scholarly essay in the cultural history of dress around the turn of the twentieth century. In this the first full-length study of literature and dress, James' is revealed to have been a close observer of contemporary modes, anticipating Barthes' insights into the semiotics of dress with an astute sense of the dramatic possibilities of the 'representative trifle'. Clair Hughes demonstrates, in a deftly argued and compellingly written volume that wears its learning lightly, just how important such trifles are to a full appreciation of the Jamesian text.' - Hilary Fraser, Department of English, The University of Western Australia

Henry James and the Art of Dress is a highly engaging, generally convincing and much needed intervention in James studies.' - Peter Rawlings, University of the West of England, The Henry James Review 24