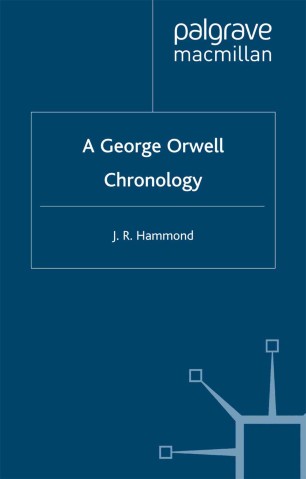 George Orwell is now acknowledged as one of the most significant literary figures of the twentieth century. As novelist, essayist and author of a number of outstanding works of reportage he has exercised an influence on modern thought which is increasingly being recognised. In this new work J.R. Hammond offers a definitive chronology of Orwell, which takes account of the latest research into his life and times and provides an overview of the life of a major writer.

J.R. HAMMOND is a Research Fellow at Nottingham Trent University. He has written and lectured extensively on literary topics and is the President of the H.G. Wells Society. A lifelong student of Orwell's work, he is the author of A George Orwell Companion and has also written volumes of Poe, Stevenson and Wells in the Author Chronologies series.