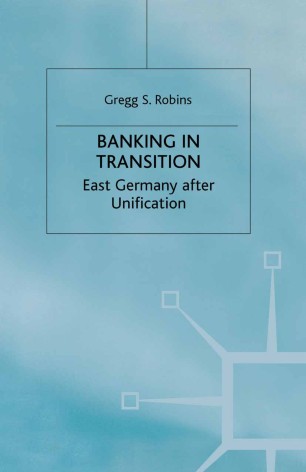 The book asks whether transplanting banks can solve the problems involved in creating a well-functioning market economy from outside, looking especially at the virtually complete takeover of East German banks by their Western counterparts after unification. Drawing on a wide range of English and German sources, and fieldwork interviews across Germany, it argues that there are no quick fix solutions to transition to a market. Implications are discussed for East Germany and for other previously centrally planned economies, and the global implications of foreign ownership in banking are considered.

GREGG S. ROBINS is currently managing director for Citibank's International Personal Banking business in Switzerland. He was previously Global EMU Director for the Citibank Private Bank. Dr Robins has published articles in the Oxford International Review, Problems of Communism and the Investors Chronicle. In this book Dr Robins is expanding on his earlier work on the subject. He received a doctorate degree in management studies from Oxford University, where he had previously earned his master's degree in Russian and East European studies. His undergraduate degree in economics is from Rice University in Houston, Texas.

'An interesting new perspective on the role banks played during reunification. Clearly a valuable contribution to the current debate on the mistakes that were made following the fall of the Berlin wall.' - Dr. Oliver R.A. Prill, Financial Institutions Group, McKinsey & Co

'The wholesale transplant of West German institutions to East Germany after reunification offers a series of laboratory-style experiments rarely encountered in macroeconomic history. Robins' study of the banking sector is both pioneering and comprehensive, an invaluable snapshot of financial transition.' - Professor Peter Oppenheimer, Christ Church, Oxford

'As scholar and banker, Dr Robins contributes outstandingly to the debate on the deindustrialization of the Eastern Länder after unification by showing that successors to the GDR state banks - chiefly the Bundesbank and the two large West German commercial banks - were institutionally inadequate to supply the risk capital needed, leaving the East a profound drain on the tax-payer of the West.' - Professor Michael Kaser, Institute for German Studies, University of Birmingham