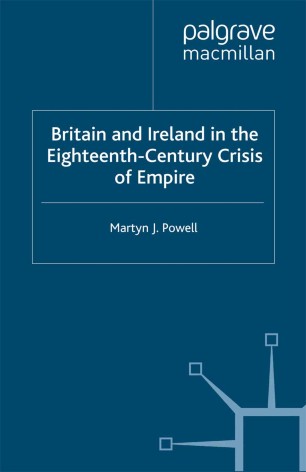 Britain and Ireland in the Eighteenth-Century Crisis of Empire

This book examines the British government's policy towards Ireland during the imperial crisis of 1750-83, focusing on its attempts to reassert control over Ireland's increasingly hostile Protestant parliament and populace. Anglo-Irish relations are placed in a wider imperial framework, taking account of British policy towards its colonies, particularly India and America. This book reassesses the importance of Townshend and constant residency; the impact of the north ministry on Irish policy; the significance of legislative independence; the nature of British party attitudes toward Ireland, and the influence of Irish public opinion.

MARTYN J. POWELL is Lecturer in Modern British History at the University of Wales, Aberystwyth. He is author of a number of articles on British Irish History and editorial adviser (history) for the British Journal for Eighteenth-Century Studies.

research...Powell...assesses British governmental policy towards Ireland in the period 1750-83, placing it in the valuable context of imperial crisis and policy...Aside from the great value of his careful account, Powell is much to be congratulated on his imperial contextualization of Irish developments.' - Jeremy Black, Department of History, University of Exeter, Reviewed for H-Albion@h-net

'A convincing account of Anglo-Irish relations set in the wider context of the imperial crisis, which saw Britain lose her American colonies and be gripped by the fear of 'independency' in her oldest colony nearer to home.' - Eoin Magennis, author of The Irish Political System, 1740-1765 and co-editor of Crowds in Ireland, 1720-1920