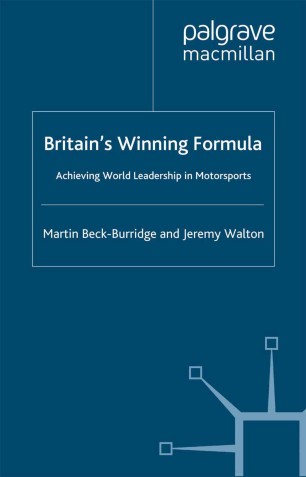 The international financial value of Grand Prix racing has grown substantially in recent years. This book will focus upon the massive size, value, importance and impact of the industry. It will also investigate the dominance of UK based Research and Development and design and the development of team strategy and tactics. The authors have based their analysis upon very up-to-date research involving interviews with key individuals at the highest level and visibility within the industry and focus upon the key management themes of teamworking, leadership, strategy and innovation.

JEREMY WALTON is a freelance journalist and the author of 25 books.

'If you ever wondered why Britain leads the world when it comes to motorsport, this is the book to spell it out...holds an incredible number of facts and figures...relating the numbers to real life is always the problem, but the authors have achieved that with aplomb...the book concludes with a call to government and the industry to ensure Britain maintains its top-dog status and CCC can only endorse a sentiment like that.' - Cars & Car Conversions

'Britain should be proud of its leadership in this industry, and sport. This book questions, provokes, criticises and probes that success - to make sure complacency is avoided. This is one success story we are determined to keep in Britain!' - Chris Aylett, Chief Executive, Motorsport Industry Association

'This is a book about the magicians who gave Britain supremacy in the most competitive industry in the world. It is long overdue and has much to teach businessmen everywhere.' - Walter Hayes, Life President Aston Martin Lagonda Ltd., and former Vice-President Ford Motor Company

'At last we have the authoritative account of the British motor racing industry and its economic importance. This well researched book is a must for those who want to learn about a British success story, and how it can be built upon in the future.' - Professor Garel Rhys OBE, Director of the Centre for Automotive Industry Research, Cardiff University Business School

'If you want to discover one industry where Britannia definitely still rules the waves, then read this book. Virtually all successful Formula 1 Grand Prix cars and American Indycars are designed and built in Britain, as are most touring and rally cars. The high-performance engineering from firms that the authors describe are at the technical cutting edge, not merely in the automotive spheres of chassis, suspension and engine design, but also in aerodynamics, electronic monitoring, software engineering and information technology. They are a symbol of technological excellence whose design details are beginning to feed into road cars. Britain's motorsport industry is in effect the UK's NASA. It symbolises our leadership in high-performance engineering. - Peter Hain MP, Minister of State, Foreign and Commonwealth Office