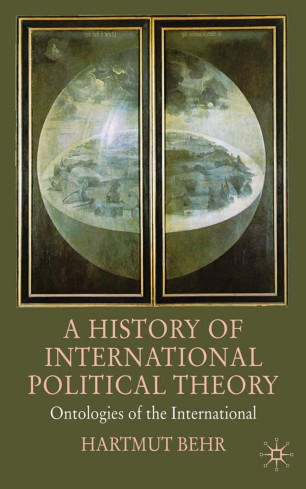 A History of International Political Theory

Ontologies of the International

Contemporary theory of international politics faces a twofold problem: the critical engagement with legacies of national power politics in connection to 20th Century International Relations and the regeneration of notions of humanity. This book contributes to this engagement by a genealogy of thoughts on war, peace, and ethics.

'Hartmut Behr's A History of International Political Theory: Ontologies of the International is a fascinating critical reconsideration of how generations of political thinkers have appraised the interplay between universal and particular interests among the relations of states in their understandings of "the world" from Western antiquity through the present-day. This richly nuanced and comprehensive analysis of the many epistemological and ontological complexities in disciplined thinking about "international" affairs will be essential reading for anyone wanting to understand how these complexities affect our moral reasoning and political decisions about war and peace, identity and difference, locality and globality as humanity deals with the strategic challenges of the twenty-first century.' - Timothy W. Luke, University Distinguished Professor of Political Science, Virginia Polytechnic Institute and State University, USA

'Taking the relationship between universalism and particularism as his starting point, Behr provides a panoramic historical vision of international political theory. In its attempt to reconstruct a philosophical genealogy of war and peace, and a renewed ethics, this original and remarkably wide-ranging book is as challenging as it is ambitious: it deserves widespread attention across International Relations and beyond.' - Michael C Williams, Graduate School of Public and International Affairs, University of Ottawa, Canada