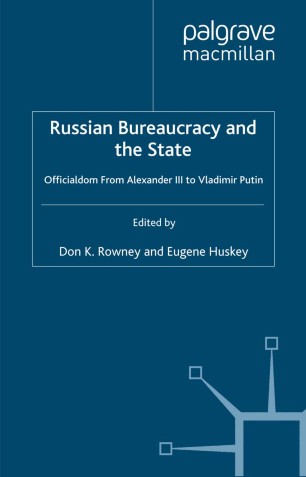 Russian Bureaucracy and the State

Russian Bureaucracy and the State provides a rich and innovative assessment of Russian bureaucracy from 1881 to the present. From a variety of disciplinary perspectives, the work assesses the organization, personnel, and practices of officialdom across three different Russian regimes – tsarist, Soviet and postcommunist.

DON K. ROWNEY is Professor of History and Senior Research Fellow at Bowling Green State University, USA. A specialist on the history of Russian state administration and European historiography, he is the author of Transition to Technocracy: The Structural Origins of the Soviet Administrative State and co-editor of Russian Officialdom: The Bureaucratization of Russian Society from the Seventeenth to the Twentieth Century.

EUGENE HUSKEY is William R. Kenan, Jr. Professor of Political Science and Russian Studies at Stetson University, USA. A specialist on politics and legal affairs in Russia and Kyrgyzstan, he is the author of Russian Lawyers and the Soviet State and Presidential Power in Russia.