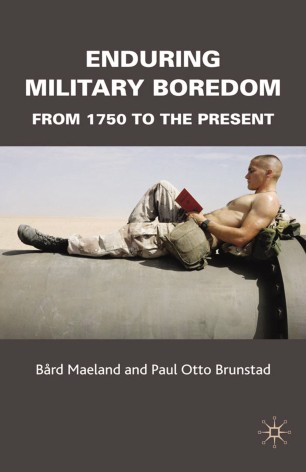 It is often said that war is 5% horror and 95% boredom. In this sense, military boredom is historically enduring as well as personally enduring for the soldiers who have to endure it. This book contributes to a deeper understanding – historically, empirically and theoretically – of the complex phenomenon of boredom in a military context.

BÅRD MÆLAND is Professor of Systematic Theology at the School of Mission and Theology, Stavanger, Norway, and is founding editor of the Journal of Military Ethics. He worked for many years as a chaplain and researcher at the Norwegian Military Academy, and also served with the Norwegian UN battalion in South Lebanon. In 2004 he published a book on the morality of young Norwegian officers serving in Kosovo, Wounded Idealism.

PAUL OTTO BRUNSTAD serves as a researcher to the Chaplaincy, Norwegian Defence. He was previously Associate Professor at the Norwegian Teachers Academy and then an instructor and chaplain to the Royal Norwegian Naval Academy. He has published two previous books: Melancholy of Victory and Prudent Leadership between Vices and Virtues.