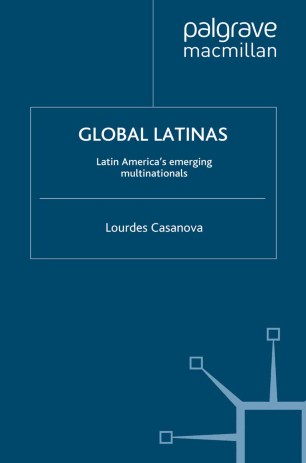 LOURDES CASANOVA specializes in international business with a focus on Latin America and multinationals from emerging markets. A Fulbright Scholar, Casanova has a Masters degree from the University of Southern California, USA and a PhD from the University of Barcelona, Spain. She has taught at INSEAD since 1989, was a visiting professor at the University of California at Berkeley from 1996 – 1999. She is a visiting Faculty at the University of Zurich a consultant of the Inter-American Development Bank and a member of the Global Agenda Council of the World Economic Forum. She has published numerous case studies and articles in research journals. Central in her research is the broader question of the future role of Latin America in the global economy: will become a key player or remain peripheral? Casanova has taught and directed executive programs at INSEAD since 1999 for senior managers from global multinationals. She has also been a consultant of multi-nationals operating in Latin America.
Lourdes Casanova can be contacted at Lourdes.casanova@insead.edu

'We have to start a new discourse, a new dream, in which Latin America overcomes its challenges, and become a leading actor of the economy, the arts and sciences overall. We see Lourdes, not as a researcher or a talented economist. We see in her an unconditional ally of our cause and her work is one of our most powerful weapons.' - Gastón Acurio, Peruvian chef and Ambassador of Peruvian cuisine

'In a conversation held in mid-2003, President Lula said that Latin America could be part of the first-world in the 21st century. After a brief debate we concluded that no first-world country can exist without first-world enterprises and the necessary path to reach progress and a wealthy society come from the process generated by national companies becoming internationally competitive. Professor Lourdes Casanova's work is extremely opportune to serve as a continuous stimulus for the growth and development of Latin America.' - Luiz F. Furlan, Minister of Industry, Development, and Foreign Trade of Brazil, 2003-2007

'Lourdes Casanova compellingly studies several globally competitive firms from Latin America, and how they have influenced their own business environments. Such knowledge of new competitors and collaborators from the emerging markets is a must for all business professionals today.' - Tarun Khanna, Jorge Paulo Lemann Professor, Harvard Business School,

'When radical change in global governance accords the rightful place at the table to emerging markets, Lourdes Casanova's fluent and intelligent account tells us what we should know about global corporations originating in Latin America. Written by a leading investigator on international business, this account transcends traditional approaches and deals with new visions, branding challenges and corporate citizenship.' - Jacques Marcovitch, Professor and Former President, Universidade de São Paulo, Brazil

'Based on a series of in-depth, vividly presented case studies this book provides a timely examination of a rising breed of multinational companies, the Global Latinas, a sizeable group of corporate giants from Latin America. The book explores the innovative business models adopted by the often charismatic business leaders at the helm of the Global Latinas, and implicitly poses the question whether they represent a unique type of multinational company or "merely" a new force on the international landscape - but with distinctive Latin American characteristics.' - Anne Miroux, Head Investment Analysis Branch, DIAE, UNCTAD

'This book offers new and interesting perspectives on the emergence and impacts of improbable multinationals: those based in Latin America.' - Moisés Naim, Editor in ChiefForeign Policy magazine

'This excellent work gives a fascinating perspective on the rise of Latin American multinationals, their increasingly important role on the global economy and the determining factors of their success.' - Daniel Servitje, Chief Executive Officer, Grupo Bimbo