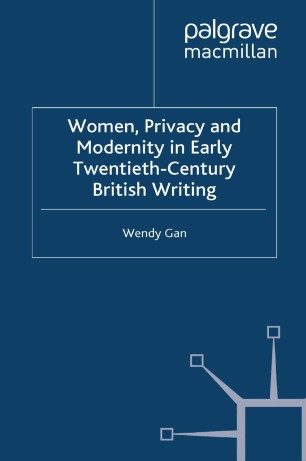 Privacy is not often thought of as a marker of modernity but a look at British women's writing of the early twentieth century suggests that it should be so. This book examines the female pursuit of privacy, particularly of the spatial kind, as women began to claim privacy as an entitlement of the modern, middle-class woman.

WENDY GAN is Associate Professor at the School of English, University of Hong Kong.

'Wendy Gan's monograph explores how early twentieth-century representations of female privacy encourage a rethinking of modernity. Among the literary texts examined are novels by Virginia Woolf, Sylvia Townsend Walker and F. Tennyson Jesse. Gan argues that whilst the autonomy of the modern subject is often presented as predicated on emphatic intervention in the public sphere, this elides the importance to the process o cultural production of the women who did not or could not leave the domestic environment. To redress the balance, focus is shifted from male flanerie to a variety of interiors. Gan demonstrates how the privacy of physical spaces, such as those provided by the rented room and the motorcar, and psycholgical retreats, such as those opened up by novels that posited alternative versions of feminine identity in the pre-modern models of the witch and the primitive...' - Routledge ABES June 20 1 1