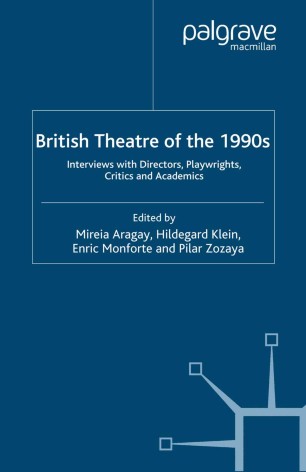 British Theatre of the 1990s

This exciting book uniquely combines interviews with scholars and practitioners in theatre studies to look at what most people feel is a pivotal moment of British theatre - the 1990s. With a particular focus on 'in-yer-face theatre', this volume will be essential reading for all students and scholars of contemporary British theatre.

"Between them, Max Stafford-Clark, Stephen Daldry and Ian Rickson, in chronological order of directorship but not interview, present a great overview of the theatre that certainly in the mid-and late-1990s became the powerhouse of new British writing and in particular, in-yer-face following the thrilling impact of Sarah Kane and Blasted."

"This is a book that contains much of interest to those who love theatre in this country."

"British Theatre of the 1990s is of particular value because it documents the Sarah Kane and in-yer-face phenomena from numerous angles, takes a good look at gay and queer theatre and makes a strong case for the Royal Court as the leader of what in retrospect and even at the time seemed like an extremely exciting period for theatre in Great Britain. " - Philip Fisher - The British Theatre Guide

"offer(s) an engaging and perceptive account of the period as well as reflections on earlier influences...It will interest academics, theatre professionals and a general readership who want to enhance their understanding of this particular historical terrain of British theatre and the perspectives of respected cultural commentators and practitioners." - Nadine Holdsworth Contemporary Theatre Review