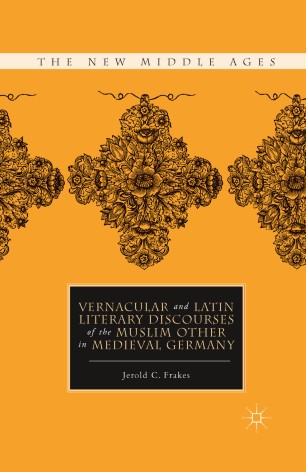 Little attention has been focused the representation of Muslims in medieval Germany. Proceeding from a grounded use of contemporary cultural theory and close textual analysis, this study focuses Muslims in several core texts representing drama, epic, and lyric written by the most important writers of medieval Germany. Far from simply adding medieval Germany to the growing scholarly list of the 'pre-post-colonializing' European cultures, the study provides important new perspectives.

JEROLD C. FRAKES Professor of English at SUNY Buffalo, USA. He is the author, editor, or translator of over ten books, including The Cultural Study of Yiddish in Early Modern Europe.

"Frakes is to be congratulated on this wide-ranging, timely and insightful study of the discourse of the Muslim Other in Middle High German and Latin works of the Holy Roman Empire. Working in the mode of Wiethaus and Ebenbauer, Frakes marshals compelling evidence against those who would depict the twelfth century as a time of growing tolerance and cosmopolitanism towards non-Christian cultures. In joining a scholarly debate largely marked by medievalists talking past one another, Frakes study distinguishes itself by his willingness to meet difficult counter-arguments head-on. By subjecting the conventional wisdom of both sides to penetrating analysis, he not only challenges our understanding of Wolfram von Eschenbach, but also forces us to reflect upon the degree to which modern critical assumptions shape even the findings of medievalists claiming to study literature in its historical context. This metacritical aspect broadens the appeal of Frakes book to include not only scholars working with Middle High German classics, but also anyone interested in post-colonial theory, medieval Islamic studies, and theories of monstrosity." - David F. Tinsley, Distinguished Professor of German, University of Puget Sound