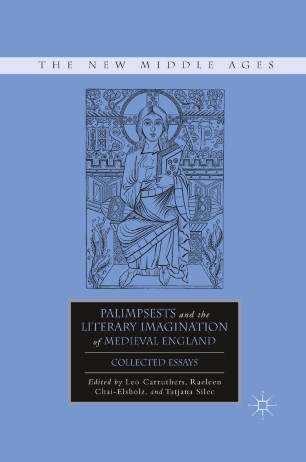 Palimpsests and the Literary Imagination of Medieval England

Witnesses to the disappearance of a text, palimpsest manuscripts bear the marks of their own genesis, with their original inscription rubbed out and written over on the same parchment. This collection explores analogies of erasure and rewriting observed in editorial and literary practices underlying the production of texts from medieval England.

LEO CARRUTHERS Professor of English at the Sorbonne, France. He is the President of the French Association for Medieval English Studies.

"Given the quality and freshness of these individual essays, it would be churlish to object that the connecting theme of the palimpsest occassionally seems less than integral to the contributions of a few of the articles. In fact, Palimpsests and the Literary Imagination of Medieval England stands as a very worthy tribute to an eminent scholar of early medieval literature." - Speculum

"These eleven original essays scrutinize the subject of the palimpsest, both literal and metaphorical, from a series of different angles and generate a rich and thought-provoking array of examples of different types of recycling and layering in verbal and visual texts from the Old English period to the present, from early medieval manuscripts to contemporary film. The range and depth of treatments of the palimpsest as both a concrete and a conceptual phenomenon are exemplary." - Laura Kendrick, Professor of Medieval Studies, Université de Versailles

"Altogether a fine tribute to, and celebration of, the life and work of a great scholar, André Crépin, on his eightieth birthday. 'Palimpsest' is given a broad definition in this collection of essays to cover both the material and the literary, that is, any alteration, abridgement, or translation of earlier texts. The contributions range from a discussion of palimpsests in manuscripts such as Beowulf, on wax tablets and vernacular engravings in the late medieval period, and how new digital technology can enhance our knowledge of palimpsests, to a broader interpretation of the word to cover the retelling, adaptation, or translation of earlier works in particular in the romance tradition, culminating in modern film adaptation of medieval literary works." - Graham Caie, Vice Principal, University of Glasgow

"Covering palimpsests both literal and literary, and ranging in subject matter from Beowulf to John Boorman's Excalibur via Bede, the matière de Bretagne, Chaucer, and more, the contributions to this volume honor André Crépin with a sparkling series of investigations into the materiality, the composition, and the transmission of Old and Middle English texts." - Timothy Graham, Associate Professor, University of New Mexico