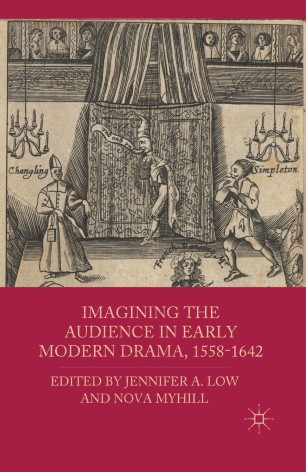 This essay collection builds on the latest research on the topic of theatre audiences in early modern England. In broad terms, the project answers the question, 'How do we define the relationships between performance and audience?'.

"The spectator speaks up, at last. As Low and Myhill point out in their brilliant introduction, research on Renaissance spectatorship has long been polarized between opposing conceptions of the audience as a collective entity or as a gathering of separate individuals, with few attempts to bridge the two approaches. This excellent collection redresses the balance not only by placing the audience (collective) and audiences (individual) at the center of its inquiries, but by setting up for the first time a fruitful dialogue between theatre history and new historicists' cultural poetics. The overall result is, in my view, the best study of theatrical reception to have emerged in recent years." - Keir Elam, Professor of English Literature, University of Bologna

"'Audience' is a complex and paradoxical term, even more difficult to comprehend when we encounter it in the flesh, as a living, breathing entity. This is an exemplary collection of essays, offering complex and multi-faceted views of early modern audiences - as producers and not only consumers of theatrical meaning; necessary participants in, and active witnesses to, the play in performance." - Steven Mullaney, Associate Professor of English and Director of Graduate Studies, University of Michigan

"Audiences appear under various guises throughout this collection: as witnesses, as civic spectators, as institutional revellers, as public and private theatregoers, as individual and collective interpretive agents, as both imagined and actual consumers and producers of culture. The real power of this volume derives from its multiplicities." - Jessica Slights, Associate Professor of English and Theatre, Acadia University