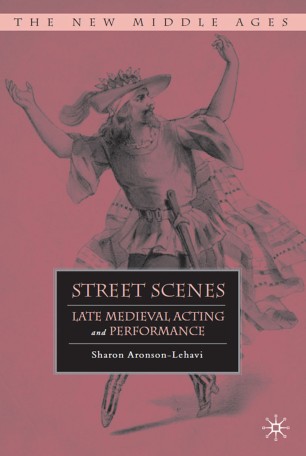 Street Scenes offers a theory of late medieval acting and performance through a fresh and original reading of the Tretise of Miraclis Pleyinge. The performance theory perspective employed here, along with the examination of actor/character dialectics, paves the way to understanding both religious theatre and the complexity of late medieval theatricalities. Sharon Aronson-Lehavi demonstrates the existence of a late medieval discourse about the double appeal of theatre performance: an artistic medium enacting sacred history while simultaneously referring to the present lives of its creators and spectators.

SHARON ARONSON-LEHAVI Assistant Professor of Theatre and Performance Studies in the Department of Comparative Literature at Bar Ilan University, Israel. She is a Fulbright grantee and recipient of a Dan David postdoctoral award.

"Aronson-Lehavi boldly opens up the issue of a conscious aesthetic of medieval performance. Her innovative reading of the Tretise of Miraclis Pleyinge explicates a theory of religious performance, particularly in relation to mystery plays. She interrogates this theory to show how actors are delineated from the characters they portray to stand as mediators between the audience and the holy figures on the stage, a positioning encouraged by the episodic structure of the plays themselves. The combination of close reading of play sequences from the York cycle with discussion of modern non-realistic experimental theatre theory works to establish a significant new focus for medieval theatre studies." - Margaret Rogerson, University of Sydney and author of Playing a Part in History: The York Mysteries 1951-2006

"Aronson-Lehavi's illuminated and nuanced reading of the hitherto little-studied Tretise of Miraclis Pleyinge reveals a coherent and comprehensive aesthetics of performance that significantly clarifies our understanding of the operations of late medieval theatre. It should be of considerable interest not only to students of this period but to all interested in the history of the aesthetics of the performing body." - Marvin Carlson, Sidney E. Cohn Professor of Theatre and Comparative Literature, Graduate Center, City University of New York