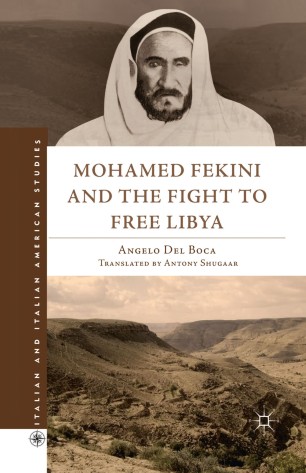 Mohamed Fekini and the Fight to Free Libya

This book provides a significant history of Italy's brutal occupation of Libya. Using the lens of the life of the iconic resistance fighter Mohamed Fekini, it tells the story of Libya under Ottoman and Italian rule from the point of view of the colonized.

ANGELO DEL BOCA is an Italian author and historian of Italian colonialism. He has written several books about the Italians in North Africa, and his book The Ethiopian War was published by the University of Chicago Press.

'Based extensively on Fekini's unpublished memoirs and letters, the book covers the two decades between the initial Italian landing at Tripoli in 1911 to Fekini's escape to exile in Tunisa in 1930 and death there in 1950. Recommended.' CHOICE

'Through the life of Mohamed Fekini, the distinguished scholar Angelo Del Boca tells the story of twentieth century Libya's trials under Ottoman and then Italian occupiers. We see the continuities of Italian colonial rule from liberalism to Fascism, but also the regime's own policies of mass violence that foreshadowed its strategies of mass repression during World War Two. Based on the diaries and letters of Mohamed Fekini, the book provides a corrective to histories of Italian colonialism told from the Western point of view. Mohamed Fekini and the Fight to Free Libya combines masterful historical reconstruction with the story of an individual life in a most skillful manner.' Ruth Ben-Ghiat, Professor, Departments of Italian Studies and History, New York University