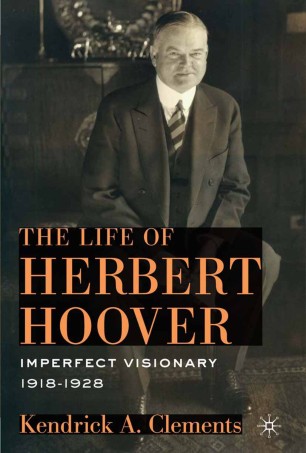 The Life of Herbert Hoover

This latest volume in the definitive six-volume biography of Herbert Hoover tracks Hoover's life and career from 1918 to 1928 - a period defined largely by his role as United States Secretary of Commerce and leading directly to his election as the thirty-first President of the United States.

KENDRICK A. CLEMENTS Professor of History at the University of South Carolina, USA.

"Kendrick A. Clements s The Life of Herbert Hoover, the fourth in the multivolume work on the life of Herbert Hoover, stands as one of the most well-researched and well-written books on the former secretary of commerce and president. Clements s narrative shows the complexity and challenges of the period, and his analysis of Hoover s years as secretary of commerce is one of the best in recent decades. Clements s research is impeccable and will aid those with an interest in Hoover for many years to come. A must read." - The Journal of American History"Examining the years between the end of WWI to Hoover s election to the presidency in 1928, Clements skillfully intersperses 4 chapters on his subject s private family life along with 18 chapters dedicated to Hoover s public career. Recommended." - CHOICE "Herbert Hoover is one of the few figures in American history who truly requires a multivolume biography, and in the installment at hand, Clements helps us understand why. This is a richly informative and illuminating study of an oft-neglected (and too often caricatured) leader as he neared the pinnacle of a remarkable career. Professor Clements has written a discerning andnecessarybook." - George H. Nash, author of the first three volumes of The Life of Herbert Hoover

"Clements' compendious, deeply researched, and highly sophisticated study of Herbert Hoover during the Paris Peace Conference and the Commerce years will serve as an important building block for a new understanding of the 1920s." - Stephen A. Schuker, William W Corcoran Professor of History, University of Virginia

"In this thoughtfully crafted volume, Clements details and analyzes both a crucial decade in Hoover's life and the ongoing whirlwinds of political and associational activity generated by his initiatives.Solidly grounded in primary evidence, it stands as the best account yet of the era's great administrator and the complex set of successes and frustrations that eventually helped to make him president." - Ellis W. Hawley, University of Iowa

Praise for previous volumes:"Able to bring a dimension to Hoover's private life that is missing in previous accounts." - The New York Times

"A good story in fast-moving, felicitous prose . . . makes all other books on Hoover during this period obsolete." - The Washington Post

"A milestone in Hoover scholarship . . . Throughout, the quality of the scholarship, the sifting and use of evidence, the imaginative reconstruction of relevant historical contexts, and the ability to communicate all deserve high marks." - The American Historical Review

"The breadth and depth of coverage here is startlingly new. The care, precision, attention to detail, and thoroughness in tracking down even the most obscure references makes this first volume of the definitive biography of Hoover an excellent reference work as well as a mine of information for those wishing to become familiar with the details of his life." - Susan Estabrook Kennedy, The Journal of American History