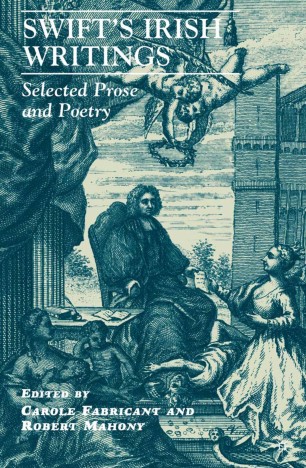 This edition presents Jonathan Swift's most important Irish writings in both prose and verse, together with an introduction, head notes and annotations that shed new light on the full context and significance of each piece. Familiar works such as "Gulliver's Travels" and "A Tale of a Tub" acquire new and deeper meanings when considered within the Irish frameworks presented in the edition. Differing in noteworthy ways from the more traditional, canonical, Anglocentric picture conveyed by other published volumes, the Swift that emerges from these pages is a brilliant polemicist, popular satirist, political agitator, playful versifier, tormented Jeremiah, and Irish patriot.


CAROLE FABRICANT is Professor of English at the University of California, Riverside, USA.

ROBERT MAHONY is Professor of English at the Catholic University of America, USA.

"This splendid anthology is a treasure-house of texts illuminating all facets of the Irish Swift andfoundational to understanding the Dean s landscape. The book s contents, forty plus pieces of prose and poetry, are superbly edited to produce texts that are easy to read and faithful to the eighteenth-century editions they are drawn from. All are deftly annotated to allow readers to understand the works historical contexts and to identify contemporary references. The masterful introduction, written in a lucid, forceful style that recalls Swift s own prose, knits the author s verse and prose (some anthologized here for the first time) into a fabric that evokes the Dean as the Anglo-Irish master he is finally recognized to be. Created for everyday use, Swift s Irish Writings will quickly find its way into the hands of undergraduate and graduate students, as well as into the libraries of18th centuryscholars and Swift enthusiasts." - Sean Shesgreen, Distinguished Research Professor of English Literature, Northern Illinois University and author of The Criers and Hawkers of London and Images of the Outcast: The Urban Poor in the Cries of London

"Once considered a classic English writer, Jonathan Swift has in recent years been increasingly read and understood as one of the major figures of Irish - as well as world - literature. To have so substantial a selection of his writings on Ireland and Irish affairs, in prose and verse, intelligently assembled, concisely introduced, and helpfully annotated by two distinguished Swift scholars will prove a considerable boon to students and teachers of Irish writing, postcolonial studies, and English literature alike." - Ian Campbell Ross, Professor of Eighteenth-Century Studies, Trinity College Dublin

"This splendid volume represents the culmination of the work of an entire generation of Swift scholars, led by the two editors, to re-locate Swift in the Irish world in which he lived and worked for the vast majority of his politically-charged life. It brings together, in ways that no previous work does, a vast range of writings on Irish subjects, from pamphlets to broadsides, economic writings, sermons and poems that show Swift's deep involvement with eighteenth-century Ireland's colonial condition and the human consequences it brought. The introduction and notes manage to contribute an understanding of Swift and his world to both specialists and general readers, alike. This book should be required reading for anyone with an interest in Swift and eighteenth-century Ireland." - Christopher Fox, Professor and Director, Keough-Naughton Institute for Irish Studies, University of Notre Dame