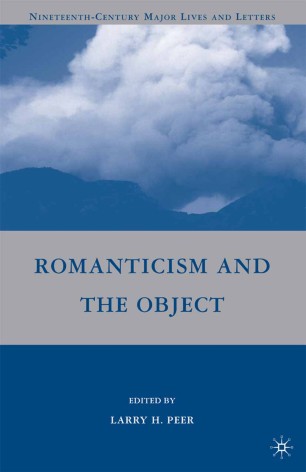 Why are material objects so prominent in European Romantic literature, both as symbol and organizing device? This collection of essays maintains that European Romantic culture and its aesthetic artifacts were fundamentally shaped by "object aesthetics," an artistic idiom of acknowledging, through a profound and often disruptive use of objects, the movement of Western aesthetic practice into Romantic self-projection and imagination. Of course Romanticism, in all its dissonance and anxiety, is marked by a number of new artistic practices, all of which make up a new aesthetics, accounting for the dialectical and symbolistic view of literature that began in the late eighteenth century. Romanticism and the Object adds to our understanding of that aesthetics by reexamining a wide range of texts in order to discover how the use of objects works in the literature of the time.

LARRY H. PEER is Professor of Comparative Literature at Brigham Young University, USA, Executive Director of the International Conference on Romanticism, and editor of the journal Prism(s): Essays in Romanticism, as well as author of several volumes.

"Modern criticism of Romanticism as a cultural movement has often struggled with the near fetishization of the object by Romantic artists. In Romanticism and the Object the complexity of the transforming Romantic gaze is explored in a series of compellingly argued essays that demonstrate that romanticizing the world and the objects in it was, and continues to be, a creative act that embraces all of culture. This book represents a substantial and timely contribution to modern Romantic criticism, as it is characterized by its enormous range and the precision of analysis of the individual essays." - Ray Fleming, John Francis Dugan Professor of Modern Languages and Humanities, Florida State University

"Romanticism and the Object is an engaging, diverse, and perceptive collection of essays that impels us to pay attention to the complex significations resonating from things and objects in Romantic-period literature . . .an important contribution to Romantic scholarship and to our understandings of the Romantic foundations of our contemporary preoccupations with objects and commodities." - Marjean Purinton, Professor of English and Associate Dean, University Honors College, Texas Tech University