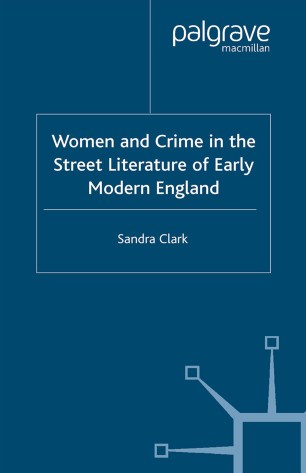 Women and Crime in the Street Literature of Early Modern England

Clark explores how real-life women's crimes were handled in the news media of an age before the invention of the newspaper, in ballads, pamphlets, and plays. It discusses those features of contemporary society which particularly influenced early modern crime reporting, such as attitudes to news, the law and women's rights, and ideas about the responsibility of the community for keeping order. It considers the problems of writing about transgressive women for audiences whose ideal woman was chaste, silent, and obedient.

SANDRA CLARK is Reader in Renaissance Literature at Birkbeck College at the University of London. She has previously taught at the University of Toronto and the Open University. She has written books and articles on the Elizabethan pamphleteers, early modern English playwrights including Shakespeare, Webster and Beaumont and Fletcher, and on the broadside ballad.