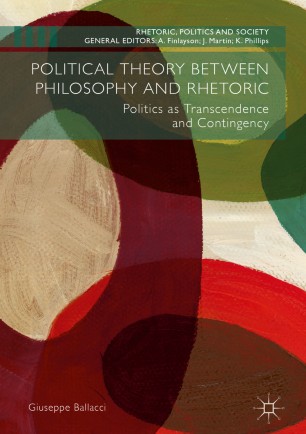 Political Theory between Philosophy and Rhetoric

Politics as Transcendence and Contingency

This book explores the significance of rhetoric from the perspective of its complex relationship with philosophy. It demonstrates how this relationship gives expression to a basic tension at the core of politics: that between the contingency of its happening and the transcendence toward which it strives.

The first part of the study proposes a reassessment of the ancient quarrel between philosophy and rhetoric, as it was discussed by Plato, Aristotle, and above all Cicero and Quintilian, who ambitiously attempted to bring them together creating an ideal that is at the roots of the humanist tradition. It then moves to twentieth-century political theory and shows how the questions that emerge from that quarrel still strongly resonate in the works of key thinkers such as H. Arendt, L. Strauss, and R. Rorty.

The volume thus offers an original contribution that locates itself at the intersection of politics, rhetoric, and philosophy.

Giuseppe Ballacci is Research Fellow at the University of Minho, Portugal.  He has held visiting positions in many institutions, including Humboldt-Universität zu Berlin, KU Leuven, Université Libre de Bruxelles, University of Chicago, and New School for Social Research. His areas of interest are Contemporary Political Theory, History of Political Thought, and Rhetoric.

“Giuseppe Ballacci’s book bridges the gulf between rhetoric and political thinking with studies of a number of ancient and modern authors. The central conceptual pair, contingency vs. transcendence, regards rhetoric as adapting politics to the specific audiences and philosophy as a medium to open up political horizons.” (Kari Palonen, University of Jyväskylä, Finland)
“In a stimulating and original analysis of Plato and Aristotle, Cicero and Quintilian, as well as Leo Strauss, Richard Rorty and Hannah Arendt, Ballacci has provided us a fresh and penetrating interpretation of the perennial debate between philosophy and rhetoric. His is an essential reading for scholars and students in political theory, rhetoric and intellectual history.” (Benedetto Fontana, Baruch College and Graduate Center/CUNY, USA)
Buy options