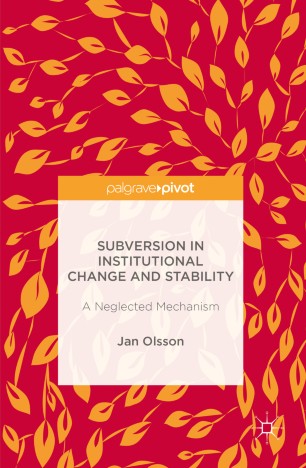 Subversion in Institutional Change and Stability

’In a compelling and accessible, grounded and theoretically informed style, this book opens up new lines of research into the micro politics of institutional change efforts, both resistant and transformative. Students of social change will be building upon, debating and extending this book for many years.’
– Professor John Forester, Department of City and Regional Planning, Cornell University, USA
‘Jan Olsson's focus on subversive action - the hidden political activity that operates against institutional rules, norms, and practices - highlights an important but neglected mechanism in new institutionalist theorizing. Both the authority and clarity of the argument developed will make this valuable contribution to the new institutionalist literature, appealing to both scholars and students alike.’
– Professor Ian Bache, Department of Politics, University of Sheffield, UK
‘In this Pivot, Jan Olsson studies “institutional subversion”, i.e. actions which break institutional rules and norms. Institutions will only shape political and social behavior as long as its rules are followed. Subversion helps us better understand institutional stability and change. The Pivot will be of interest to students of institutions.’
– Professor Jon Pierre, Department of Political Science, University of Gothenburg, Sweden
This book theorizes subversive action, a neglected mechanism in the new institutionalism literature. Subversive action is political in nature, secretly undermining some institutions to open up alternative ideas or to secure existing institutions by secretly undermining adversaries. An example is a politician who promises change in public, but does something else behind the scenes to preserve the status quo. The book addresses the nature and meaning of subversive action and the contexts that give rise to it, as well as how it can work as an important mechanism behind institutional change and continuity. The book will interest students and scholars of public policy, public administration and political science.
Jan Olsson is Professor of Political Science at Örebro University, Sweden. His research focus is on policy analysis, public administration, and planning. He has published articles on policy-making, implementation, multi-level governance and inside activism in journals such as the Journal of European Public Policy, Planning Theory and Practice, and Environmental Politics.