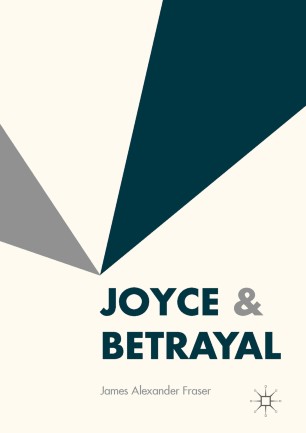 'The book is a pleasure to read: straightforward, clear, in every way well-written. Containing admirably detailed discussions of Stephen Dedalus, Leopold Bloom, and Molly Bloom from the perspective of a topic so important to Joyce, Fraser brilliantly analyzes their motivations, actions, thoughts, and feelings as exemplifications of the theme of betrayal.' - J. Hillis Miller, UCI Distinguished Research Professor of Comparative Literature and English Emeritus, University of California, Irvine, USA

'The centrality of the idea of betrayal in Joyce’s works is one of the truisms of modernist criticism, but, as James Fraser demonstrates in this invigorating study, the issue has never been examined in the depth and with the subtlety it deserves. Fraser, in drawing out the complexity of the repeated drama of dedication and betrayal in Joyce’s writing, brings to the topic an attentiveness to the literary texts (including the often-neglected Exiles) and an alertness to their historical and political contexts that enable him to do it full justice.' - Derek Attridge, Professor of English, University of York, UK

'Joyce scholarship has assumed that the notion of ‘betrayal’ is so well-known it barely needs mentioning, when in fact there has been little specific explication of the theme. But here is a thorough, incisive analysis of the complexities of betrayal that shows Joyce’s literary and narrative attachment to that idea.' - John Nash, Reader in the Department of English, University of Durham, UK

This book offers a fundamental and comprehensive re-evaluation of one of Joyce’s most pervasive themes. By showing that betrayal was central to how Joyce understood and depicted the difficulties and terrors at the heart of all relationships, this book re-conceives Joyce’s approach to history, politics, and the other. Leaving behind the pathologising discourses by which Joyce’s interest in betrayal has been treated as an ‘obsession,’ this book offers a vision of Joyce as both dramatist and theorist of betrayal. It demonstrates that, rather than being compelled by some unconscious urge to produce and reproduce textual betrayals, Joyce had a deep and hard-won conception of the specific dramatic energies wrapped up in the language and structures of betrayal and repeatedly found ways to make use of this understanding in his work.