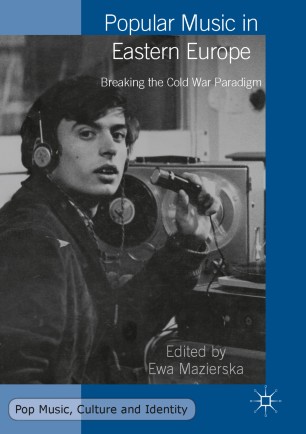 ‘This collection represents a multidisciplinary examination of popular music in Eastern Europe during the period of state socialism. By exploring the music of these countries with an internal focus, rather than in a simplistic relation to Western popular culture and the Western imagination, the role of the DJ, of stars, of journalism, of language and technology, as well as politics and youth culture are explored in relation to national politics and culture, between nations and between cultures. What emerges is a series of detailed explorations of music in individual contexts that collectively draw attention to the complexities and nuances of popular music production and consumption in the Eastern Bloc.’
– Simon Poole, Falmouth University, UK
This book explores popular music in Eastern Europe during the period of state socialism, in countries such as Poland, Hungary, Yugoslavia, Romania, Czechoslovakia, the GDR, Estonia and Albania. It discusses the policy concerning music, the greatest Eastern European stars, such as Karel Gott, Czesław Niemen and Omega, as well as DJs and the music press.  By conducting original research, including interviews and examining archival material, the authors take issue with certain assumptions prevailing in the existing studies on popular music in Eastern Europe, namely that it was largely based on imitation of western music and that this music had a distinctly anti-communist flavour. Instead, they argue that self-colonisation was accompanied with creating an original idiom, and that the state not only fought the artists, but also supported them. The collection also draws attention to the foreign successes of Eastern European stars, both within the socialist bloc and outside of it.