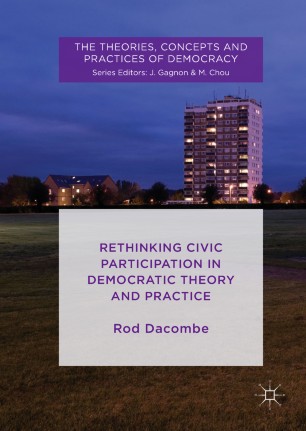 Part of the The Theories, Concepts and Practices of Democracy book series (PSTCD)

This book makes an important contribution to contemporary debates over the place of civic participation in democratic theory and practice. Drawing on a detailed case study of the Blackbird Leys area of Oxford, the book employs a novel empirical approach to ask whether widespread participation in civic life can enhance the prospects for democracy, given the low levels of participation which tend to exist in deprived areas. Throughout, it presents an account of participation rooted in the history and development of the case, in order to avoid the kinds of abstraction which are characteristic of many existing studies in the area. The book will appeal to scholars working on democratic theory in applied settings, and will be of interest to anyone concerned with inequalities in civic participation.

Rod Dacombe is Lecturer in Politics in the Department of Political Economy, King's College, London, UK. Previously he was a Leverhulme Early Career Fellow in the same department. He works on civic participation, democratic theory and the role of voluntary associations in public administration.

“This timely book makes a valuable contribution to the literature on participatory democracy, providing a nuanced account of the relationship between civic participation and deprivation, and highlighting the importance of placing the analysis of democracy in its proper context.” (Professor Matthew Flinders, University of Sheffield and Chair, Political Studies Association)

“This book has an old fashioned ring to it in that it grapples with long-standing debates in democratic theory and offers a detailed community study to explore the issues. But its thoughtful and in-depth approach does deliver new insights and ultimately a message of hope that even a neighbourhood suffering from deprivation and social isolation has within it the capacity for community action and political participation.” (Professor Gerry Stoker, University of Southampto)

EN-US">“Supporters of more intensive forms of civic participation have always faced one big challenge: their desired reforms could result in larger political inequality through giving more voice to the most resource rich members of the community. Dacombe’s book makes an important contribution to this debate. Through a rich case study of a deprived community, he illuminates many of the existing tensions between poverty and participation. The analysis provides an interesting answer to the criticisms raised by minimalist democrats to participatory democracy, without making an uncritical appraisal of the limits and problems that participation in deprived settings has in real life. The richness of the book theoretical dialogues and of the empirical materials make it useful for several areas of research, from democratic innovations, to third sector research and from local politics to research trying to understand the structural explanations of participation.” (Professor Joan Font, Instituto de Estudios Sociales Avancados, Spain)