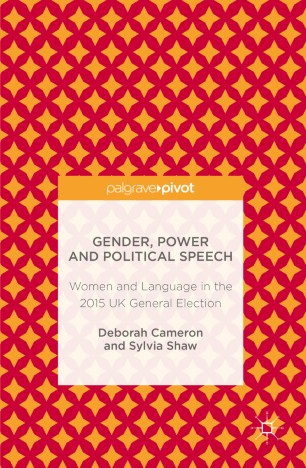 Women and Language in the 2015 UK General Election

Gender, Power and Political Speech explores the influence of gender on political speech by analyzing the performances of three female party leaders who took part in televised debates during the 2015 UK General Election campaign. The analysis considers similarities and differences between the women and their male colleagues, as well as between the women themselves; it also discusses the way gender - and its relationship to language - was taken up as an issue in media coverage of the campaign.
Deborah Cameron is Professor of Language and Communication at Oxford University. She has been an active researcher in the field of language and gender studies since 1985, and her previous publications include The Myth of Mars and Venus(2007), On Language and Sexual Politics (2006) and Feminism and Linguistic Theory (1992).
Sylvia Shaw is Senior Lecturer in English Language at Middlesex University, UK. She has examined gender and language in the House of Commons, and conducted ESRC funded research in all the UK’s legislative assemblies. She has published book chapters and journal articles, and is currently preparing a book, Women, Language and Politics.