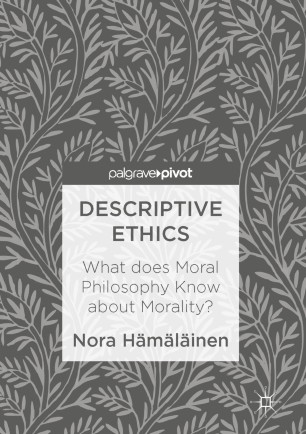 What does Moral Philosophy Know about Morality?

This book is an investigation into the descriptive task of moral philosophy. Nora Hämäläinen explores the challenge of providing rich and accurate pictures of the moral conditions, values, virtues, and norms under which people live and have lived, along with relevant knowledge about the human animal and human nature. While modern moral philosophy has focused its energies on normative and metaethical theory, the task of describing, uncovering, and inquiring into moral frameworks and moral practices has mainly been left to social scientists and historians.  Nora Hämäläinen argues that this division of labour has detrimental consequences for moral philosophy and that a reorientation toward descriptive work is needed in moral philosophy. She traces resources for a descriptive philosophical ethics in the work of four prominent philosophers of the twentieth century: John Dewey, Ludwig Wittgenstein, Michel Foucault, and Charles Taylor, while also calling on thinkers inspired by them.
Nora Hämäläinen is Associate Professor (docent) in philosophy at the University of Helsinki, Finland. She is the author ofLiterature and Moral Theory and has co-edited the volume Language, Ethics and Animal Life — Wittgenstein and Beyond (with Niklas Forsberg and Mikel Burley).