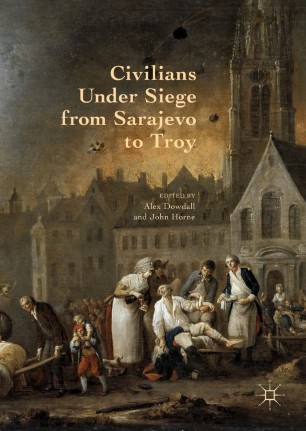 Civilians Under Siege from Sarajevo to Troy

This edited volume analyses siege warfare as a discrete type of military engagement, in the face of which civilians are particularly vulnerable. Siege warfare is a form of combat that has always had devastating effects on civilian populations. From the near-contemporary Siege of Sarajevo to the real and mythical sieges of the ancient Mediterranean, this has been a recurring type of military engagement which, through bombardment, starvation, disease and massacre, places non-combatants at the heart of battle. To date, however, there has been little recognition of the effects of siege warfare on civilians. This edited volume addresses this gap. Using a distinctive regressive method, it begins with the present and works backwards, avoiding teleological interpretations that suggest the targeting of civilians in war is a modern phenomenon. Its contributors interrogate civilians’ roles during sieges, both as victims and active participants; the laws and customs of siege warfare; its place in historical memory, and the ways civilian survivors have dealt with trauma. Its scope and content ensure that the collection is essential reading for all those interested in the place of civilians in war.

Chapter 2 of this book is available open access under a CC BY 4.0 license at link.springer.com