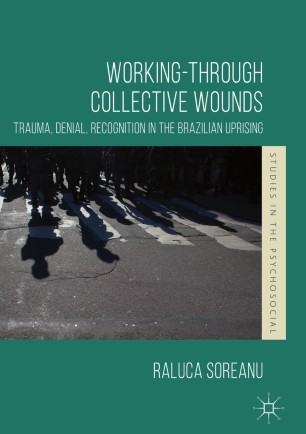 ‘In times that call for resistance to resurgent political authoritarianism, finding ways to establish democratic spaces for association and solidarity are of the utmost importance. Drawing on the psychoanalytic ideas of Sándor Ferenczi, now re-emerging as a powerful theorist of trauma, and locating her thinking in relation to the actualities of the 2013 Brazilian street protests, Raluca Soreanu explores issues of violence, memory, mourning and recognition in their personal and social configurations. This book is poetic and scholarly, innovatively combining psychoanalytic and social ‘voices’ to offer new routes through to collective action.’
-Stephen Frosh, Birkbeck, University of London
Working-through Collective Wounds discusses how collectives mourn and create symbols. It challenges ideas of the irrational and destructive crowd, and examines how complicated scenes of working-through traumas take place in the streets and squares of cities, in times of protest. Drawing on insights from the trauma theory of psychoanalyst Sándor Ferenczi and his idea of the ‘confusion of tongues’, the book engages the confusions between different registers of the social that entrap people in the scene of trauma and bind them in alienation and submission. Raluca Soreanu proposes a trauma theory and a theory of recognition that start from a psychoanalytic understanding of fragmented psyches and trace the social life of psychic fragments. The book builds on psychosocial vignettes from the Brazilian uprising of 2013. It will be of great interest to psychoanalysts interested in collective phenomena, psychosocial studies scholars and social theorists working on theories of recognition and theories of trauma.
Raluca Soreanu is Wellcome Trust Fellow at the Department of Psychosocial Studies at Birkbeck College, University of London, UK. She is a practising psychoanalyst, associate member of the Círculo Psicanalítico do Rio de Janeiro and of the Instituto de Estudos da Complexidade, Brazil. She has published on psychoanalytic theory, psychosocial studies and the sociology of creativity.