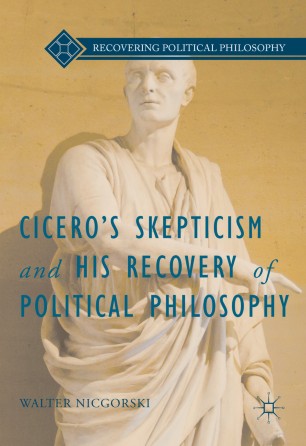 Cicero’s Skepticism and His Recovery of Political Philosophy

This book explores Cicero’s moral and political philosophy with great attention to his life and thought as a whole. The author “thinks through” Cicero with a close reading of his most important philosophical writings.  Nicgorski often resolves apparent tensions in Cicero’s thought that have posed obstacles to the appreciation of his practical philosophy.  Some of the major tensions confronted are those between his Academic skepticism and apparent Stoicism, between his commitment to philosophy and to politics, rhetoric and oratory, and between his attachment to Greek philosophy and his profound engagement in Roman culture.  Moreover, the key theme within Cicero’s writings is his intended recovery, within his Roman context, of both the Socratic focus on great questions of practical philosophy and Socratic skepticism.  Cicero’s recovery of Socratic political philosophy in Roman garb is then the basis for recovery of Cicero as a notable political thinker relevant to our time and its problems.